Earlier today I received the following message from a friend on FACEBOOK...

We will be sending this message around to see if members are active or not. If you are active please send to at least 15 other users using Copy Paste to show that you are still active. Those who do not send this message within 2 weeks will be deleted without hesitation to create more space.

Send this message to all your friends and to show me that your still active and you will not be deleted.


This of course is a HOAX!!

Lord only knows how many people have forwarded this and hundreds of other phony emails to friends and family with good intentions.

I am amazed how many people continue to fall for such obvious scams every single day. I receive emails from friends several times a week about fictitious viruses that will melt my monitor, proposed taxes on my emails and sick children who are trying to make it into the Guinness Book Of Records by receiving the most Birthday Cards.

Any email that asks you to forward the email to more people should be immediately suspect. If you are not sure, go to Snopes.com , Hoax-Slayer.com, Urban Legends.com or simply copy the first line of the text into google and you pull up the search results.

Before you hit that FORWARD button on your email, be a good Cyber Citizen and verify the post!
Posted by Jim Coston at 9:59 AM No comments:

One More Reason I Love Thailand

Lately, my cell phone has been acting up.

It's fine 90% of the time and then will freeze and require me to remove the battery and do a hard reboot thus losing any previously unsaved messages.

Last night I decide to take it down to Tukcom, our 6 story IT "Department Store" in South Pattaya. There are hundreds of computer, camera and cell phone shops and kiosks located in this one location.

The second floor is strickly cell phones. Here you can choose from 1000's of phones and accessories provided by dozens of dealers.

I took my phone in and described my problem to a service tech. He took the phone apart, cleaned it, ran diagnotics, restored factory settings after backing up my data AND NOT ONCE TRIED TO SELL ME A NEW CELLPHONE!

After investing 20 minutes of his time, he handed the phone back to me, working good as new.... and NO CHARGE!! I tried to offer him a tip and he refused that as well.

He bowed his head slightly and smiled.

I walked away thinking "God, I Love Thailand!"
Posted by Jim Coston at 11:06 PM No comments: 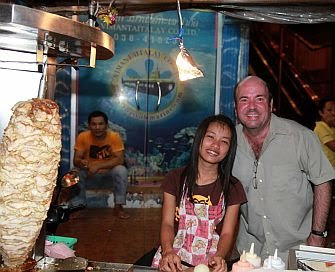 One of the best things about living in Thailand is the great food found everywhere. Whether you are eating in from a street vendor's stall or one of the thousands of restaurants, who can be assured of a great dining experience.

Everynight, vendors set up their food stalls in night markets and on street corners throughout Thailand. Chicken, fish, pork, shrimp and a myriad of others, not so easily identifiable items are cooked in front of you and served fresh.

Many people worry about eating on the street. All I can say is, I've never suffered any ill effects (except to my waistline).

When you are fortunate to live in or visit a different country and culture - take advantage of all of it! Big Macs will be waiting for you when you get home!
Posted by Jim Coston at 2:35 AM No comments:

Recently, spoke with a Thai friend of mine. He told me he hadn't slept at all the night before and I asked him why?

He said his family was away and he was home alone... and he was afraid of ghosts!

"Pee'e" or ghosts are common in Thai lore and, to this day many Thais fervently believe in them.

After a week the ghost usually accepts the fact that death has claimed him and is usually not seen or heard from again. If the pee'e stubbornly refuses to accept death he will wander about aimlessly for eternity.

According to legend, spirits and ghosts live almost everywhere in Thailand. Most large trees are said to have a ghost or spirit living inside of them.

The favorite place for female ghosts to live is in a banana grove. There are many species of banana plants in Thailand, but a 'tani' banana grove is the preferred haunting place.

Many Thais wear medallions or amulets around their necks and which they believe will protect them from harm or provide them with other forms of assistance. Different amulets have different powers but amulets offer well-being to the wearer and help keep bad spirits away.

There is no Thai who does not know Mae Naak. The gothic tale of Mae Naak has been filmed more than twenty times, every one of them is a box-office hit. Whether Mae Naak ever existed or just a fabrication is unknown as there is no historical evidence of her existence. Most Thais tend to believe her story is genuine.

The story is Mae Naak dies during complications of childbirth after her husband, Nai Maak is conscripted into military service. She and the child are quickly buried but her strong spirit refuses to rest.

When Nai Maak comes back from the war, the ghost of Mae Naak disguises herself and her "infant son" as humans. Eventually, Nai Maak discovers the ghostly truth and runs away and of course, Mae Naak follows.

There are many gory accounts of how Mae Naak chases, harasses, and even kills whoever comes between Nai Maak and her.

Almost every night you can count on the Thai TV to dramatize one or two ghost stories, Thais love them and many DO believe!!
Posted by Jim Coston at 5:00 AM No comments: 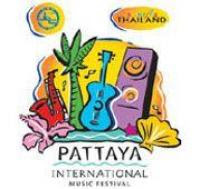 After a years' absence, the Grand Pattaya Music Festival is back in town March 20 - 22, 2009 for a weekend of listening and dancing to beautiful music performed by more than 100 musicians.

The annual event is part of a wider nation-wide campaign Amazing Thailand Amazing Value managed by the Tourism Authority of Thailand to deliver events and value-for-money features to Thai and international travellers.

On Friday 20 March, visitors can enjoy Pop songs at the Bali Hai, Rock at central Pattaya and easy listening music at Soi 4.

On Saturday March 21, Pop and Rock will be performed at the Bali Hai stage, Hip-Hop at central Pattaya, and Jazz at Soi 4.

International artists such as SHINEE and Girl’s generation from Korea, Kym Jin Sha from China, Cirque due Freak from Australia, Minh Thu from Vietnam, Rynn Lim from Malaysia, and Kenny Kwan from Hong Kong will also perform.

Suvarnabhumi Airport (aka Bangkok International Airport) was awarded the world's 5th best airport of 2008 by the Geneva-based Airports Council International (ACI), it was announced earlier today.

The ACI conducted a survey on service quality of 108 international airports, involving over 200,000 passengers worldwide.

The ACI ranked Suvarnabhumi as the 28th airport with the best service quality, moving up from the 41st spot in 2007.

Having personally flown in and out of Suvarnabhumi AIrport more than 20 times since it's opening, I can say it deserves the recognition!
Posted by Jim Coston at 6:07 AM No comments:

How Low Will It Go??

Back in June 2008, I wrote a blog about the impending worldwide financial meltdown that was predicted to occur in the Sep - Nov 2008 timeframe.

Quoting from the London Telegraph...

"A report by the bank's (RBS) research team warns that the S&P 500 index of Wall Street equities is likely to fall by more than 300 points to around 1050 by September as "all the chickens come home to roost" from the excesses of the global boom, with contagion spreading across Europe and emerging markets.


Such a slide on world bourses would amount to one of the worst bear markets over the last century."

I got a lot of scoffing from friends who considered themselves to be "financial experts".

One friend went so far as to say the downturn (the DOW was at 11,500 at the time) was the "perfect" time to move into stocks as they likely would never be that cheap again.

I hope he bought lots of stocks that week!!

I have been telling my friends to move to a cash position for over a year. I recieved an email from one of them this morning.

Last January we worked together in Tahiti, he told me he was having sleepless nights over his stock portfolio and unsure what to do. I of course told him to sell...and soon.

Oh, how happy do I continue to be for selling all that stock a year ago? Citigroup is about $1.50 (I sold at around $19) and Bank Of America is around $3 (I sold around $28). Remember how tortured I was about selling those two? Now I'm dancing a JIG!

If you are still in the market, it may be too late to bail out now as almost all value has been eroded. The smart money left a long, long time ago...
Posted by Jim Coston at 10:02 PM No comments: