Remembering the lessons of Katrina

Three Years ago this weekend Hurricane Katrina tore a path of destruction through New Orleans and the Gulf Coastal Region. 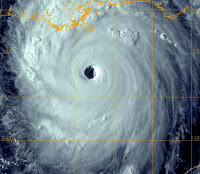 As those of us who lived through that tragedy pause and reflect, another unwelcome visitor by the name of Gustav looms on the horizon.


I spent 21 years living in the French Quarter and although I lost "stuff" in the storm, I was among the lucky ones. I was in the middle of the Indian Ocean when the storm hit and my work in the Cruise Industry meant I still had a job.

I still have many friends in New Orleans and I hope & pray they have already heeded the warning to evacuate. This storm is not to be taken lightly no matter where it makes landfall.


The Levies have supposively been rebuild to withstand a Cat 3 storm but the erosion of the natural barrier islands in the last storm mean there is less protection than in 2005.

As a city built below sea level, there is only one course of action when a storm like this approaches - get out!!


Growing up in Florida & Louisiana, we commonly joked about "Hurricane Parties" and rode out the storms. Since Andrew wreaked havoc in South Florida in the early '90's that attitude has changed.

And remember, the peak of Hurricane season is still 9 days away...
Posted by Jim Coston at 6:09 PM No comments:

On the Road Again

Since the bills have got to be paid.....


I'm off for three weeks of trans-shipping between the Tahitian Princess and the Sun Princess from Aug 06 - Aug 30.


It will be my first appearence on the Tahitian (my 84th different cruise ship!) but it is identical to the "new" Pacific Princess which I have performed on numerous times.


Both ships initially are in Alaska and I'll switch to the Sun Princess in Juneau. Once I join the Sun, it begins a long trans-pacific cruise to Asia - I'll disembark in Osaka, Japan.


The flight from Bangkok to join the Tahitian in Vancouver takes a little over 24 hours (via Tokyo & Seattle) - fortunately, the return flight from Osaka is less than 5 hours.


When you have a great job like I am fortunate to have AND you live in a beautiful country like Thailand, coming and going is always a mental tug-of-war.


I get home and the last thing I want to do is pack another bag and leave again and yet once I'm actually "settled in" on board a ship, leaving that environment is equally as hard.


All in all , not a bad problem to have.


Posting will be sparse until I return in September. If you're new to my blog, take a few moments to read my posts from last year (think of it as summer reruns)!
Posted by Jim Coston at 10:08 PM No comments:

Actually it's 6.6 Degrees of Separation...

Six Degrees of Separation a 1993 film starring Will Smith and Donald Sutherland popularised the notion that all people can be connected to each other by a small string of relationships.

It is a variation of a game called Six Degrees of Kevin Bacon, which involves trying to trace the nearest path of acquaintanceship between the actors and the Hollywood star or another famous person.

Turns out it may be true.

Microsoft Researchers, monitored 30 billion instant messages (stripped of their contents) transmitted by 180 million people all over the world during a single month. It found that most of these people were separated from everyone else using the messaging system by an average of 6.6 relationships.

What does it all mean? Well, in this internet connected world of IM's, Emails, Blogs and Social Networking Websites, we are truly a global community.
Posted by Jim Coston at 1:56 AM No comments:

Part of the charm of any living in a different culture than your own are the phrases that are hard to explain, but are part of every day life.

While the origin of the phrase in hard to determine, it's use is common.

Because it's such a uniquely Thai expression, it always elicits a smile from the locals!

I guess, because Thais love to practice their English whenever possible and I try to speak using my limited Thai, we manage to mangle each others language yet somehow understand each other!!

While Thai is a difficult language for Westerners, I find myself drawn to it and enjoy the daily discoveries that one finds while living in the Land of Smiles.
Posted by Jim Coston at 2:14 AM No comments: