Where Are They Now?

Sometimes you work with someone and lose complete touch with them in the ensuing years. That is the case of Cyndi Grecco and Richard Beavis.
I worked with Cyndi Grecco & Richard Beavis on board the Cruise Ship "Meridian" in the early 1990's. She was performing as a Lounge Pianist and he was the Male Vocalist on our cruises from New York to Bermuda.
If you don't remember Cyndi Grecco by name you'll recall the hit record she had in 1976 - "Making Our Dreams Come True" (Billboard #25) because you heard it every week as the theme song to the immensely popular TV sitcom " Laverne & Shirley".
Cyndi also lent her vocal talent to the theme song of short-lived TV Comedy "Blansky's Beauties".
I remember her southern drawl and long hair extensions and her vivacious personality. She was hoping to move from Piano Lounge to Headline Cabaret Act but I don't know if she ever made the transition.
After the summer , we kept in touch by email occasionally but eventually her email address became invalid and we lost touch. Last I heard she was living in Long Beach CA. I've "googled" her and can't find any recent information on her.
Originally from Wales, Richard Beavis was the male lead vocalist in the ship's production shows and also performed his own cabaret show. A handsome young man with a great voice, he was discovered on a televised talent show in England and landed a recording contract. 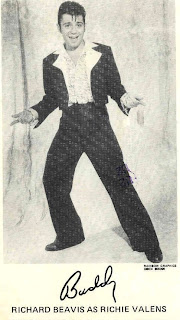 He went on to tour in the English Touring Show "Buddy!" (The Buddy Holly Story) as Richie Valens. During that summer contract I helped Richard by reading the script in order to help him with learning the dialog.
I know Richard is still out there performing because I hear his name mentioned from time to time but our paths have not crossed in almost fifteen years.
If anybody out there knows either of them, let them know an old banjo playing friend was asking about them!
Posted by Jim Coston at 3:26 AM

Hiya Jim. Like you, I've been Googling for Cyndi Grecco as I'd like to put a face to that great voice. Do you happen to have a photo you can post? Cheers. -Martin

I used to be personal friends of Cyndi Grecco and Billy Courtwright, partners for years until they had a big fight about who sang what, I moved and when I returned back in the late 90's I lost track of her and the last I hard she is living in Long Beach, CA. We all worked in vegas and she and my friends played Piano bars from Los Angeles to San Diego. Last time I say Cyndi she had black long hair but I heard when she was working the cruise ships she bleached her hair blonde?