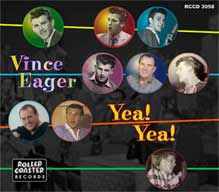 For 20 Years, I've had the pleasure of knowing Vince Eager. Vince and his wife Anette have been close friends since we first worked together in 1987 on board the MS Ocean Islander.

If you grew up in the United Kingdom in the late 1950's, you'd remember Vince from over 100 appearances on such TV shows as “Oh Boy”, “Drum Beat” and the “Six Five Special”.

Vince was a tall young man with an even bigger voice released 14 singles and 5 albums in the UK. He was handled by Promoter Larry Parnes who's stable of entertainers also included “Tommy Steele”, “Marty Wilde” and “Billy Fury”.

After the death of his good friend Eddie Cochran in a car crash, Vince parted ways with his manager over Larry Parne's plans for posthumous promotion of Cochran death.

Through the years, Vince performed around the world and starred for 5 years in “ELVIS” on London's West End in the 1970's.

In 1986 Vince took up residency in Fort Lauderdale, Florida when, for twelve years, he became a Cruise Director on luxury American cruise ships. I had the pleasure of working with him on several different ships.

Vince and Anette returned to England in the late 1990's in order to be closer to children and grandkids.

Today, Vince still sings up a storm and tours throughout the U.K.
Posted by Jim Coston at 3:41 AM

It happened to me this week! I met Vince (Billy's flatmate!) at a launch at Soho House for this wonderful new DVD of Billy Fury’s life the following and what a great group:

John Leyton - Great Escape Actor
Vince Eager - Billy’s flatmate
Clem Cattini - Drummer with the Tornados. I didn’t know that he played on over 50 number one singles!
Johnny Gentle - the only performer ever to have the Beatles as his backing band!
Dave Vanian - lead singer with The Damned and the voiceover to the new DVD!

Check out the Billy Fury DVDhere