The “Other” Dave Barry


Earlier today I was watching the Cartoon Network and saw an old Bugs Bunny Cartoon called “8 Ball Bunny” (1950). A running gag in the animated short is “Humphrey Bogart” making multiple cameo appearances asking Bugs "Pardon me, but could you help out a fellow American who's down on his luck?" 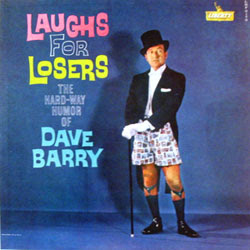 
LOS ANGELES (AP) — Comedian Dave Barry, who opened for a number of top performers, including Wayne Newton, died Thursday. He was 82.

The comedian, who was not related to the Miami-based humorist of the same name, was born in New York City and started his career at age 16 on radio's "Major Bowes and the Original Amateur Hour."

He moved to California in the early 1940s and served in the Army during World War II entertaining troops.

Toward the end of that decade, Barry began performing in Las Vegas at the El Rancho Hotel. He was featured at the Desert Inn in a revue called "Hello America." He opened for Wayne Newton for more than eight years.

Barry had television and film credits, most notably in Billy Wilder's "Some Like It Hot," in which he played the role of Beinstock, the band's manager.

In the latter part of his career, he entertained on cruise ships and appeared in the "Follies," a Palm Springs, California, variety show.

It was on cruise ships that I got to know Dave and his wife Virginia back in the late 1980’s. We often Headlined together for Royal Cruise Lines on the Crown Odyssey and Royal Odyssey.

Dave Barry was a very funny, giving performer who often asked me to share the stage with him for impromptu funny business.

The Obituary doesn’t tell the whole story of this talented man.

Dave appeared numerous times on the Ed Sullivan Show as well as appearances on Green Acres, I Dream of Jeanie, The Monkees, Get Smart,77 Sunset Strip, The Colgate Comedy Hour and dozens of others from the 50’s – 70’s.

Of course, Dave made his place in cinema history playing along side Tony Curtis, Jack Lemmon & Marilyn Monroe in the classic comedy “Some Like It Hot!”

A few years ago, while listening to an old Edgar Bergen Radio Show, I recognized his voice (doing Arthur Godfrey!) and I was pleased to hear him given credit at the end of the broadcast.

Dave Barry would probably have been a voice actor with as many credits as Daws Butler or Paul Frees had he remained based in Los Angeles. Being a stand-up comedian was his bread-'n'-butter and it took him on the road for months at a time thus limiting the amount of studio work he could rely upon.

A lot of what he did do when in town was looping and dubbing for movies. In Roger Corman's film of The Raven, he can be heard making sounds for the title character and dubbing voices for Peter Lorre and Vincent Price. In at least one movie, he re-dubbed all the dialogue for the Indian actor, Sabu, to make him more intelligible.

Mention Dave’s name to any old school Las Vegas act and they’ll all have fond memories of this delightful performer. Truly one of Show Biz’s nice guys.
Posted by Jim Coston at 4:55 AM

Thank you so much for the thoughtful write-up for my grandfather Dave Barry - he was a very funny and talented man indeed. Here is a link to a stand-up comedy show he did back in 1992 that really captured him: https://www.youtube.com/watch?v=r48vWiytvno&feature=youtu.be