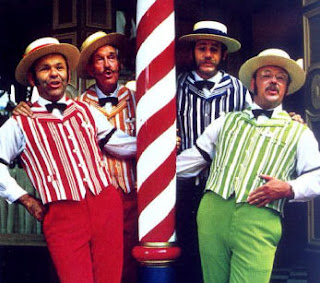 Bub Thomas second on Left
Growing up in Central Florida in the 1970’s meant that Walt Disney World was destined to be a major influence on my career. Although I never worked for “the Mouse”, many of my closest friends did and that allowed me greater access to the Theme Park than the average tourist.

In future blogs I’ll talk about Pat Terry, Eddie Erickson, Randy Morris and many other early “Disney Influences” on my career as they were considerable. Today, I’d like to talk a little about Charles “Bub” Thomas.

Bub Thomas was a member of the Main Street Barbershop Quartet “The Dapper Dans”. Grey hair and moustache and wearing a yellow stripped vest, he was instantly recognizable to hundred of thousands of Park regulars.

The Dapper Dans had been a staple of both Disneyland and Disney World for many years and had been featured on the “Mickey Finn Show” on NBC in the mid 1960’s. Up until Bub joined the group, they were primarily known for their vocal talents – Bub brought a touch of Vaudeville to their performances.

Bub sang, danced, told jokes, and even drew caricatures.. When Bub joined the Dapper Dans, he also brought with him a curious instrument known as the Deagan Organ Chimes.

Invented by John Calhoun Deagan in 1900, it is a unique instrument that features a series of spiky hollow tubes connected to each other. By shaking the tubes in specific combinations, melodies and chords are produce.

Under Bub's influence, all of these things eventually worked their way into their performances as well as an increased interaction with the audience. A new generation of “Dapper Dans” performs at the theme park, but Bub’s signature is still all over their show.

I used to go watch them at the Barbershop on Main Street quite often and got to know Bub fairly well. He would always have time after their show to stick around and chat with me, sharing great stories about the “heyday” of nightclubs and the vaudeville circuit.

I learned a lot about my craft from Bub and I appreciated that he always took the time to share his experiences with me when he could have just as easily slipped down the tunnel and rested in the “green room” between sets.

Bub Thomas passed away almost 10 years ago at age 86, but ask any “Disney Regular“ and they have fond memories of this talented man.
Posted by Jim Coston at 2:06 AM