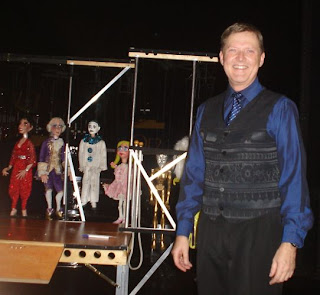 Every once in awhile, you get to work with someone who is the absolute best at his craft. While on the QE2 last week in India, I worked with such a person – Phillip Huber.

Phillip is probably the best Marionette Artist of his generation. I first worked with him 21 years ago on board the Costa Cruise ship “Daphne” and we have remained good friends through the years.

The Huber Marionettes have appeared all over the World from Japan to Monaco to Brazil. They are constantly in demand on high end cruise ships as well as theatres across Europe, Asia & South America.

Phillip’s amazing talents were on display in the motion picture “Being John Malkovic” (doing all the puppetry work for John Cusack) and he and his marionette dog “Taffy” danced on Broadway with Tommy Tune in “Busker Alley” He also worked Muppets for Jim Henson’s TV Special with John Denver and has been featured on the “Tonight Show”.

All of the marionettes in his shows are original creations of Phillip. He designs, builds, costumes, choreographs and manipulates all of his characters. Many of which have over 20 different string controls which bring these characters to life in a truly amazing way.

If you are like most people, the thought of going to a “Puppet Show” probably isn’t your first choice for an exciting evening out. I’ve seen my share of marionette shows through the years and the majority of them were pretty lame.

The Huber Marionettes are truly the exception to the rule. If you’ve never seen them, make the effort to go anytime they are in your area. If you have seen them in the past, I certainly don’t need to convince you!

As an aside, Phillip once designed (but never built) a marionette based upon my likeness! It is of course a banjo playing marionette! Phillip still has the drawings so I’m still hoping to immortalized in wood eventually….